This is the last roll from my trusty Olympus SP-35 partycam captured from early September all the way to the end of October. That sweet camera is officially hooped. Oh how it hurts to lay an old friend down. I might as well bury the thing and say a little prayer of thanksgiving.

My sweet love and I have been married for one month. Feels great! This polaroid was shot by my cousin Ziggy immediately after we had walked down the aisle and were grinning like idiots! Looking at this psychical photograph one month later makes me grin so wide my cheeks hurt. Good sign. 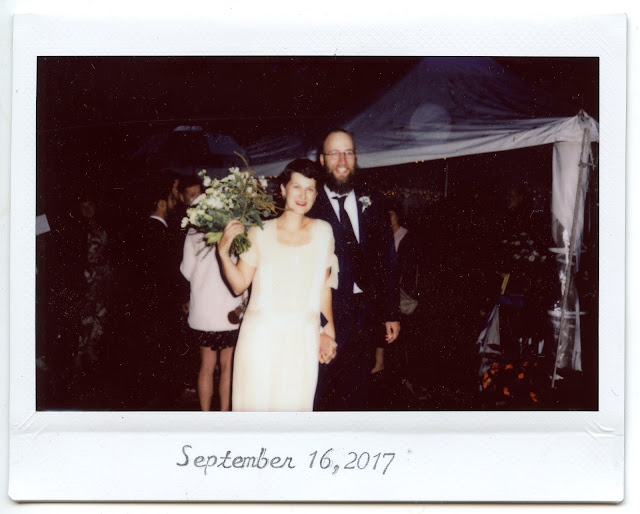 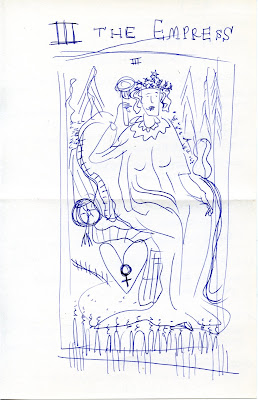 Portrait of a Quilt


While on the honeymoon homestretch, Iain noticed my hyper focus shift to the last GD block on my small rookie quilt. A wise woman once told me to keep the first of every experiment and this hand stitched quilt was quite the experiment for yours truly. This one's for me. I will make more for the people! I began this quilt in April, on a grey Mental Health day at home. Free to play around with the stack of recently dyed and printed fabric I had kicking around. The white blocks were leftover fabric from a very soft duvet I had thrifted for another purpose many moons before then. I have started on a new quilt for a new babe in my life (still percolating away in a lovely woman I know) which will be triangles of blue moons and the like. Stay tuned.

I have been spending a good deal of my summer hours in the company of little children by the looks of this photo essay titled "Transformers"! No complaints there. Rich times. Today I got paid to clomp around in my wooden sandals at the Tot Lot pretending I was Bernie's imaginary (and very lucky) yellow No. 7 Racehorse called Dench. Dench (as in Judi?); gender unknown and totally beside the point. Bernie is three and three quarters going on 27. The other day Berndog, his young sister Carys and I were cruising along St. Matthews Ave. when Bernie skidded to a stop on his balance bike in front of a large hole in the street. "How on earth did you get down there?" he asked the man standing in the hole in his high-vis gear wrenching on a giant sewer pipe. The man's head sprang up from his work like a coil, shocked by the sudden pitch and cadence of the a boy's voice interrupting his solitude. "I jumped" the man responded. Bernie asked him how he intended to get out and the man responded with a gruff "I will climb". I could tell that conversation had run it's course so we moved along. For the entire way home, Bernie considered aloud every possible option for the entrance and exit of such a deep hole.

We both agreed that his best way in was to slide (obviously) and his best exit stratedgy was to jump on Dench's back, hold on for dear life and leap together. Mercy me this child is a wingnut who I am easily entertained by. If I should become a mother in this lifetime, I will be well equipped for my child's sensitive period to WHY. "Why did you say that Miss Meg?". If I had a bloody dime for each time I was faced with this question Monday through Friday, I would be long cruising in the Subaru Outback that I cannot afford at present. I spend a great deal of my daytime either laughing with (and a lot of the times at) Bernie or completely flabbergasted by what comes out of his mouth from the back pockets of his young mind.

Caregivers, write down your child's stories. When I reread the various accounts and anecdotes observed and recorded in the journal I have kept over the past couple of weeks for Bernie and Carys' parents, I can't help but laugh each time I reflect. I find the entries that tell of funny things that come out of their mouths especially helpful during those dark hours where I am ready to launch out of a high window because no one has napped and the dog is in my way and there is underwear on the ceiling and a banana stuck to my leg. These are the days of my life! Always the nanny, never the mom. Has it's perks. I get to go home alone and smoke a pipe in the bathtub.

When I pulled that roll containing the image of my cousin Sara's boy Jack clad in his 100% polyester Transformers suit captured on a hot ass Friday morning in August, I had to freakin' laugh. Kids. So cool and weird and free. I like them. Here are some faces I have recorded in the last two weeks.

Tricks for the Kids


The six colour / six contrast selection of photos above were captured on my old faithful Kiev 60. 120 Portra 400 for colour and 120 Delta 400 for the contrast. I have been very, very busy with photowork over the course of two months. I realized today while chucking a load of washing into the dryer that it is time to stop shooting. Lay the camera down for a spell. This very thought caused my internal driver to shift suddenly, miss a gear midair, land heavily and carry on with the tasks at hand. Heart drop. Oh well. I will come back to it, I always do. It feels good to have found a new pace in the last two weeks. I think the combination of eating better quality food and simplified living, paired with more movement is beginning to make way for greater energy and focus. I can feel Autumn approaching as I work around my home, taking care to pare down and cleanse our space before we turn a new page as newlyweds. Perhaps that is strange to do or say, but it feels good and I am following my gut on this one.  I have organized and stockpiled the darkroom like a productive squirrel. It is nearly time to get crackin' on those mountains of bounty. But not quite! Soon. Today's rainy day Solar Eclipse had me buzzing to get busy in the dark. I have one last wedding to process and then it will be time to print.

My own wedding to Iain fast approaches. I feel funny when people ask for lists to knock off and simply respond with "we're good" because we are. The idea of all of the ideas and details of the day coming together makes my heart swell! The wedding process has been strange and stressful but these days it feels good and simple and now I am suddenly very excited. Yesterday while taking the long way home from the International Peace Garden near Boissevain, Manitoba, Iain and I found ourselves at the mouth of our favourite piece of land, scratching our heads in wonder at the thought that in a few weeks time we will gather with 80 of our most loved people and celebrate encircled by trees. I like his slow smile when he discovers a loose air hose under the hood of his truck. Panic rises in me, but he grins at the possibility of sleeping outside for the third night in a row. Oh my heart, did I ever think I would marry a poet? Never! I can hardly wait to begin another new chapter with my love.


Posted by Margot Pollo No comments:

Every sunny morning around 7:20, the front parlor fills with the most incredible, warm light. As I rise from the dark shadow end of our home, I am drawn to this sunny spot like a cat. I never want to go to work when I settle in my rocking chair with the first cup of coffee, the sun warming my back as I observe Iain tune his mandolin. These photos do not do the magic of the light justice but I tried to capture it as best I could.
Posted by Margot Pollo No comments:

Summer is in. Life is rich with the laughter of small, funny children ringing through my house, warm winds tousling the bedroom curtains, cycling with more skin exposed than clothing, stains from cherry pits on a white nightgown, dirty floors from sandalled feet, not to mention the sound of sunflower seeds cracking and flying out the window of a new car.

Here is a look in at my recent goings on of the high season. Farm visits to tend the garden and seduce wild kittens with my charms, beach picnics with little ones putting sandy hands in the cracker box, watching a small child learn to trust her instincts on a bicycle. Walking aimlessly with a good friend before she leaves for good.

Nothing quite beats receiving a new hat in the post or walking home to a grocery bag of beets and dark leafy greens hanging from the doorknob.

Captured on Iain's trusty Canon AE-1 on Delta 400. I am not sure why these came out so gritty, perhaps the meter is off? Oh well, ca va. Take me or leave it.